ftdnc.org  ›  News  ›  Co-existing with Coyotes During their Mating Season and Beyond

Co-existing with Coyotes During their Mating Season and Beyond 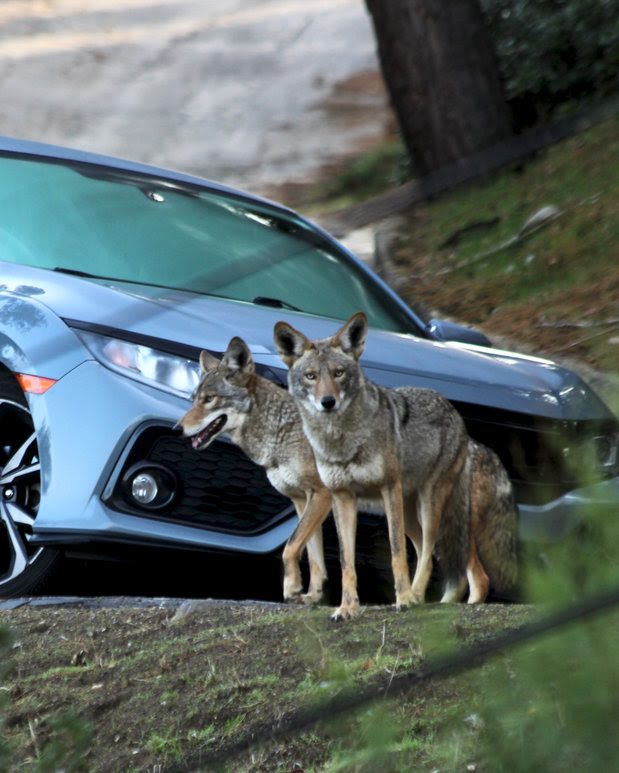 DO NOT feed coyotes.

DO NOT approach or try to pet coyotes.

Do NOT leave pet food outside (feed your pets indoors).

DO NOT leave open crawl spaces under sheds or decks that could be attractive to coyotes for nesting or even just resting.

DO NOT leave fruit rotting on fruit trees or the ground.

DO NOT leave garbage or garbage bags available to coyotes (put all garbage and garbage bags in trash cans with tight lids.

DO NOT let your dogs off-leash except in your own fenced yard designated fenced dog parks.  Pets should not be wandering our wilderness trails, where they could harass the native coyotes of the area and provoke a coyote attack by chasing them or wandering too close to a den. Coyote family members will come to help the coyote being chased and may (and do) injure the dog.  Your dog may try to protect you when the situation is simply that the coyote is trying to get you and your dog to leave their territory.  Even if you think your dog has perfect recall, do not allow dogs to be off-leash in Shadow Hills wilderness areas and trails.

DO NOT leave small pets and children outside alone.

If you have an unspayed  female or intact male dog, understand that coyotes may be attracted to them, both on your property and off. Unneutered pets should never be off-leash outside of your property.  Consider spaying and neutering your pets.

If you encounter a coyote, it is most often when you see it moving away from you.  If that is the case, enjoy the opportunity to observe the local wildlife.

If you encounter a coyote and the coyote does not move away or is approaching you, pick up any  small pets (less than 20 lb.) or a small children and carry them.  Keep larger pets on a leash right next to you, and keep older children right next to you.

DO NOT turn and run, which will trigger the coyotes prey instinct and they WILL chase you.

Stand up as tall as you can.

Make yourself as big as you can (e.g open your coat wide),

Back away slowly and smoothly from the coyote.

Don’t be alarmed if the coyotes follows you at a safe distance; they do this to make sure you are leaving their territory;

If this doesn’t seem to be working, and the animal is not obviously sick or injured*, and it is not mating or pupping season (see below), you may haze the coyote. The idea is to scare them, not injure them, and “train them” to avoid humans. You may haze them with these behaviors:

Yell or carry and use a noise maker (whistle, shake coins in a can, etc.)

If at home, squirt the coyote with water from your hose.

If these techniques don’t work, throw rocks toward the coyote, but not actually at the coyote.  Again, the idea is to scare them, not injure them.

California Coyotes mate between the months of late January and March.  Male coyotes become more aggressive if encountered and may also attempt to mate with dogs. Pregnancy lasts about 2 months.  Then the first few months after birth coyote moms are protective of their young and the dens.  So, from January thorough July, coyotes may be less likely to leave an area when hazed if they are actively seeking mates or protecting their young.  During these months:

Be aware of possible den areas and avoid them. Walk well away from thick clumps of brush where dens may be located.

If encountering a coyote between Jan. and July,  make eye contact, make yourself look big, and back away from coyotes. Do not haze them.

Consistent hazing by everyone in a neighborhood during the months of August through December is the most reliable way to train coyotes who are not afraid of humans to be uncomfortable around them and make efforts to avoid humans and human encounters.  This allows peaceful coexistence among the human and canine species.